Art Lit 2020, collaboration of arts and literature hosted by Broward County Libraries and the Pompano Beach Cultural Center was a great success this month. 25 chalk artists joined live painters, virtual reality artists, and more at this 3rd annual community event on Saturday, January 11th. I was happy to continue the role of chalk artist coordinator in helping to bring the art of live street painting to the City of Pompano Beach. 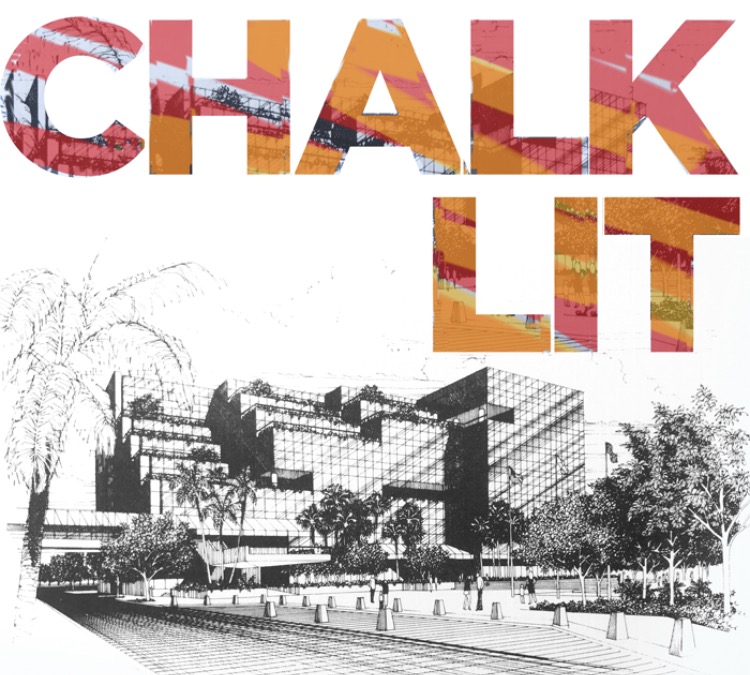 The 2018 Chalk Lit festival is coming to you this January at the Broward County Library downtown Fort Lauderdale. This free 1-day festival celebrates literature through dozens of 2D & 3D chalk murals covering the north square of the Main Library.
To apply as a chalk artist click here: Artist Application
The theme is *literature* and you may choose to work 4×6′, 5×5′ or 6×6′. SPACES WILL BE LIMITED!
Visit Chalk Lit Fest Linkhttp://www.broward.org/Arts/PublicArt/Pages/Chalk-Lit.aspx for details.

Sunday, March 13th get ready for the 2016 St. Patty’s Day Parade Downtown Hollywood, Florida. I will be chalking something green on the street from 2-6pm at 2016 Hollywood Blvd, downtown Hollywood. Get your green on! 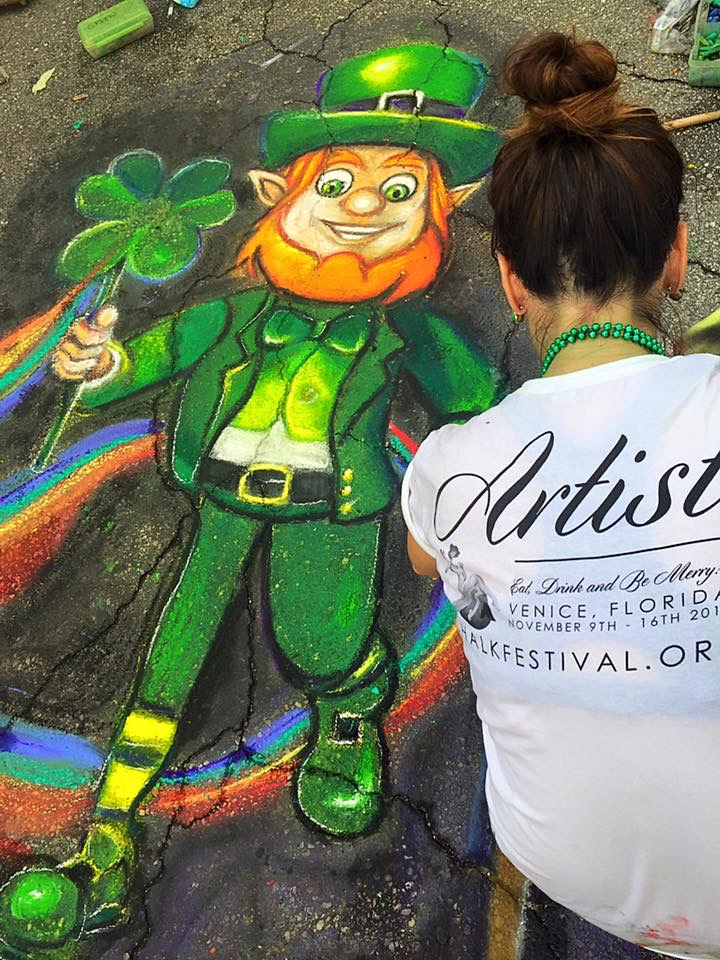 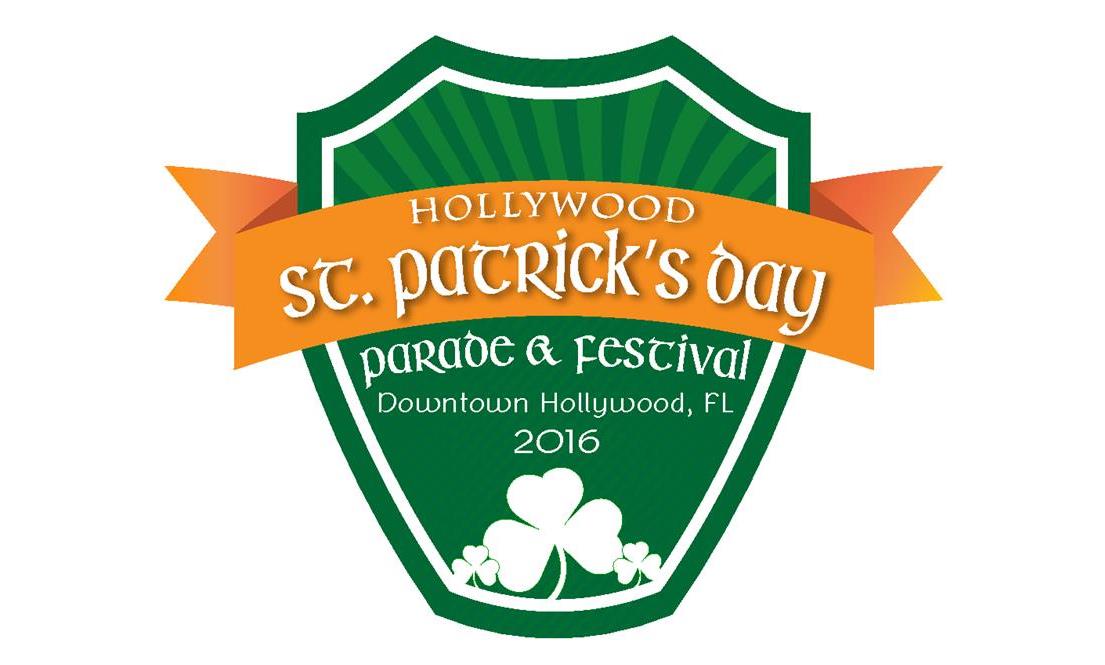 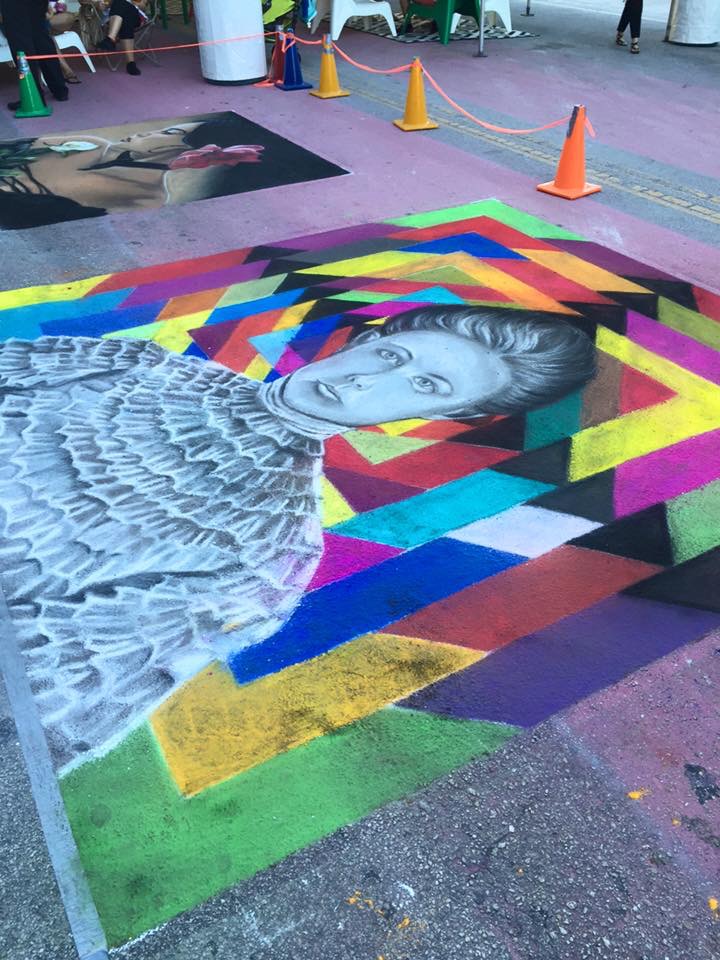 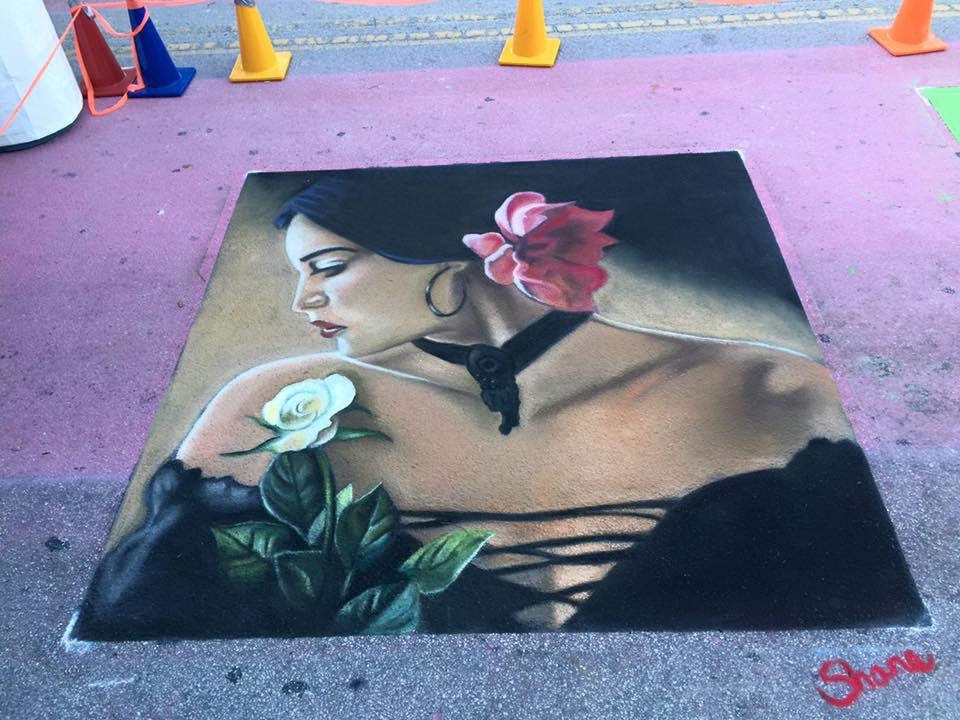 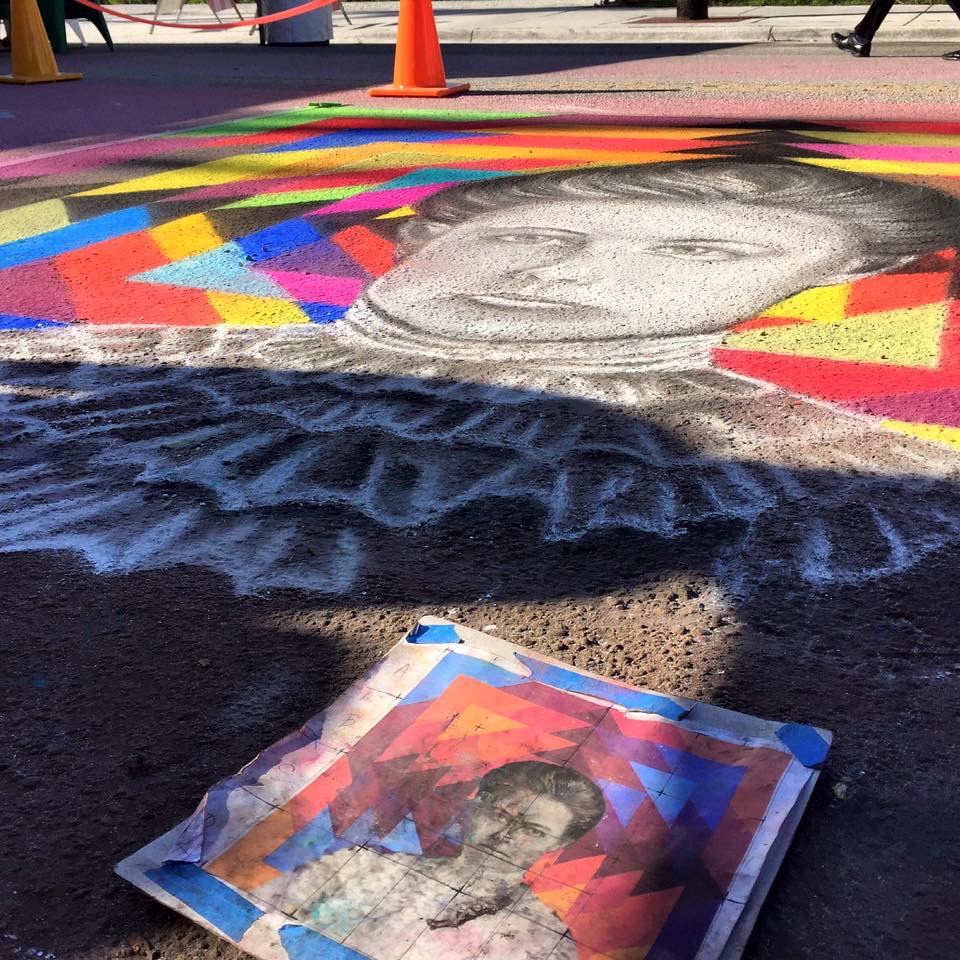 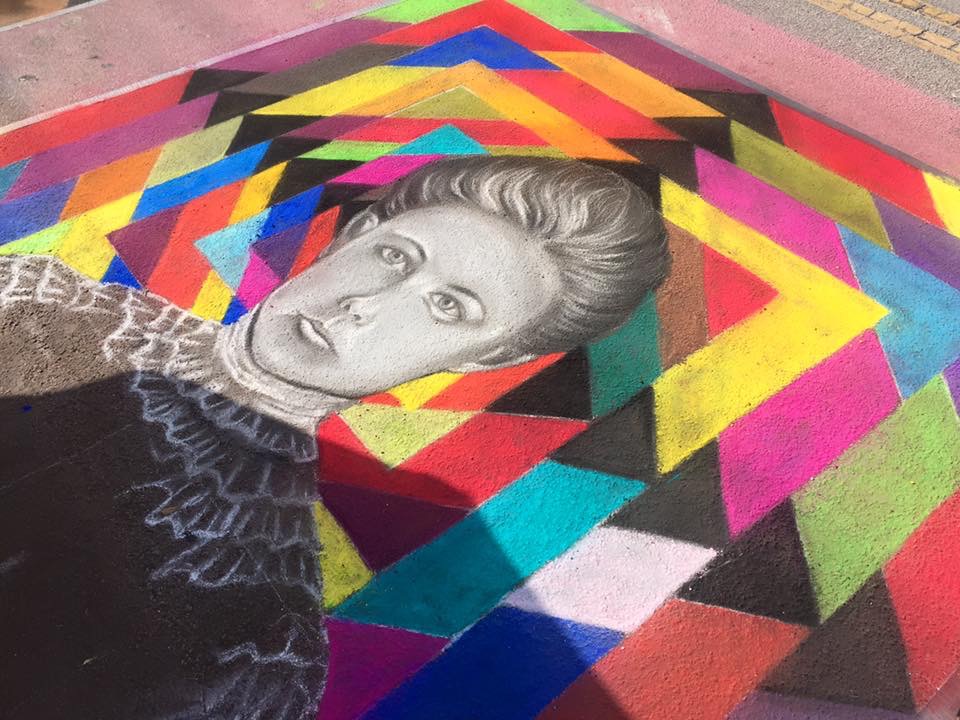 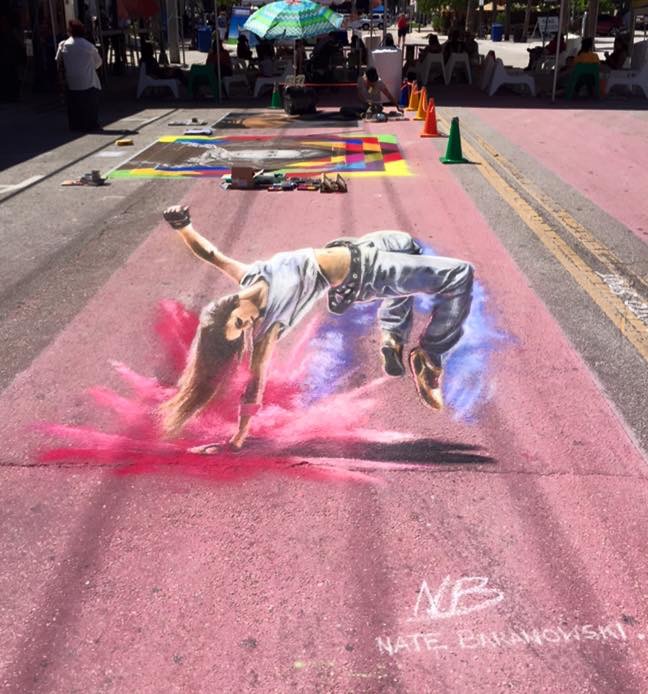 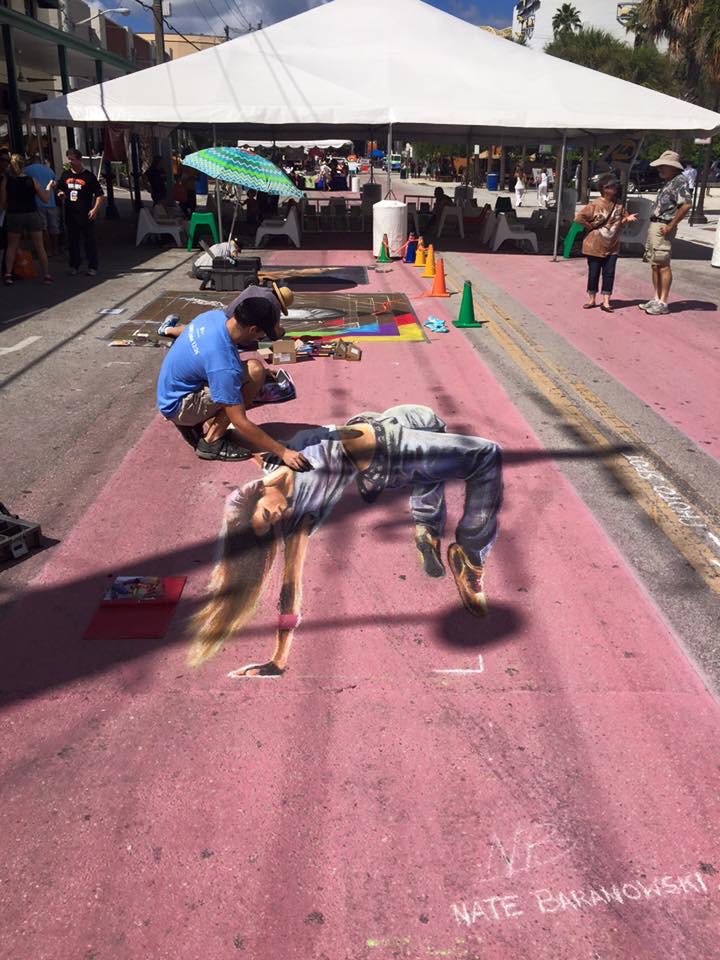 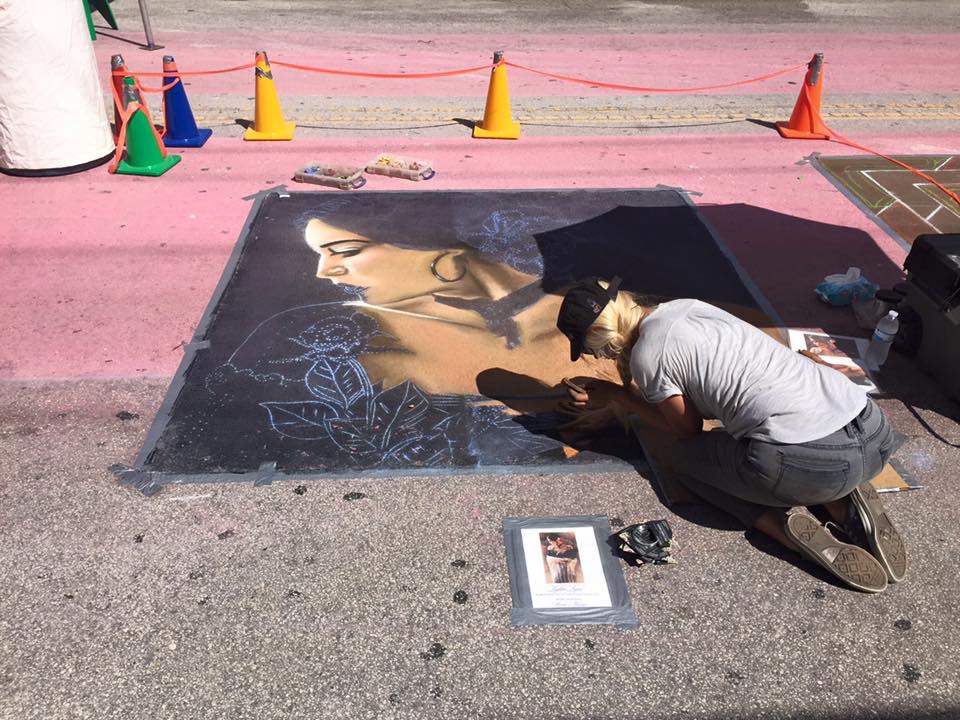 I will be creating a chalk mural alongside 2 other talented street painters for this special event honoring Broward County’s 100th birthday!

“2015 marks the 100th birthday of Broward County. Broward 100 is a yearlong centennial celebration to showcasing the communities within the County and commemorating its history, culture and arts.
Broward 100 commemorates Broward County’s centennial with bold, innovative art and performance projects that attract visitors and bring Broward residents together using our arts, sports and recreation venues, natural attractions and incredible diversity to creatively bridge, bond and build their communities.” -Broward Cultural Division 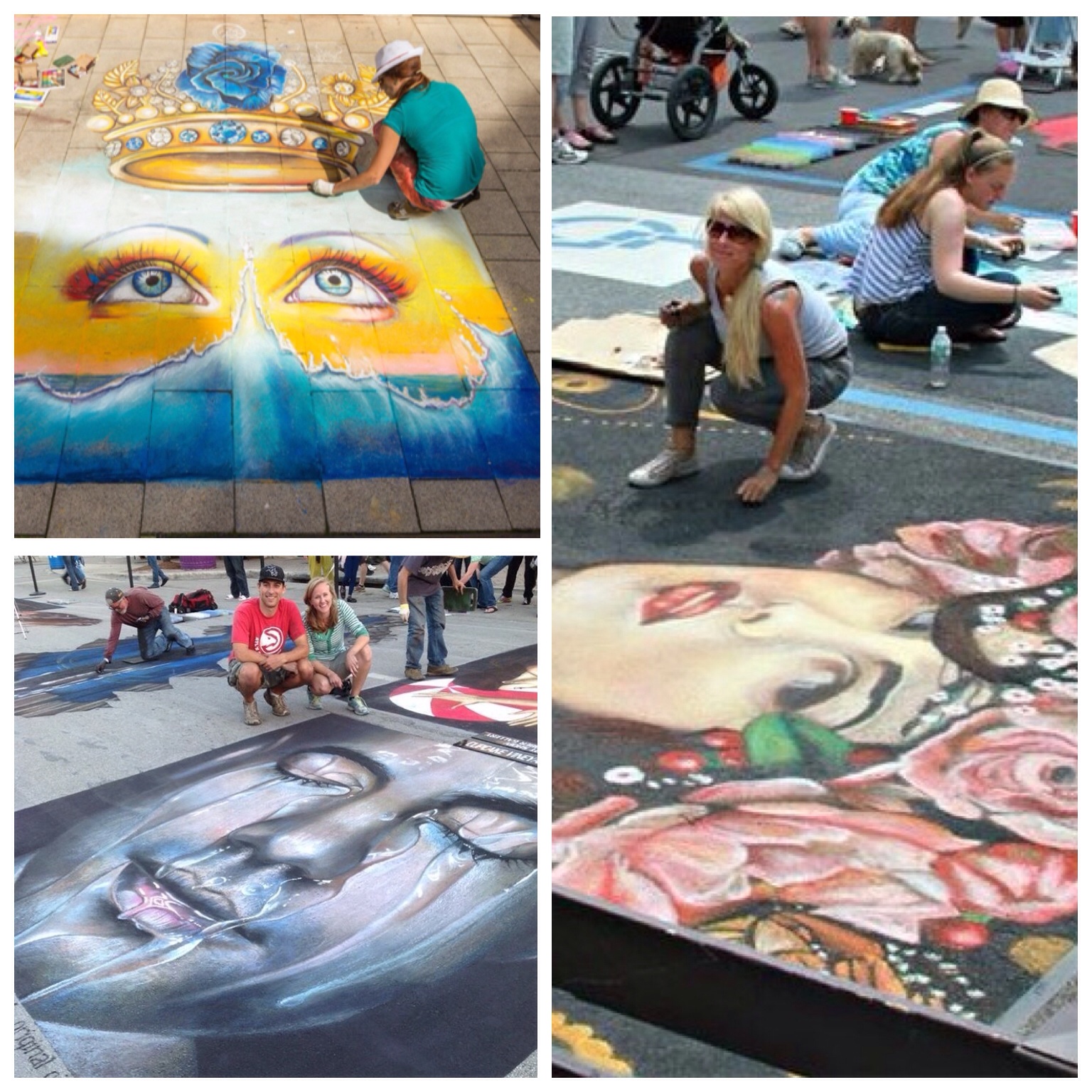 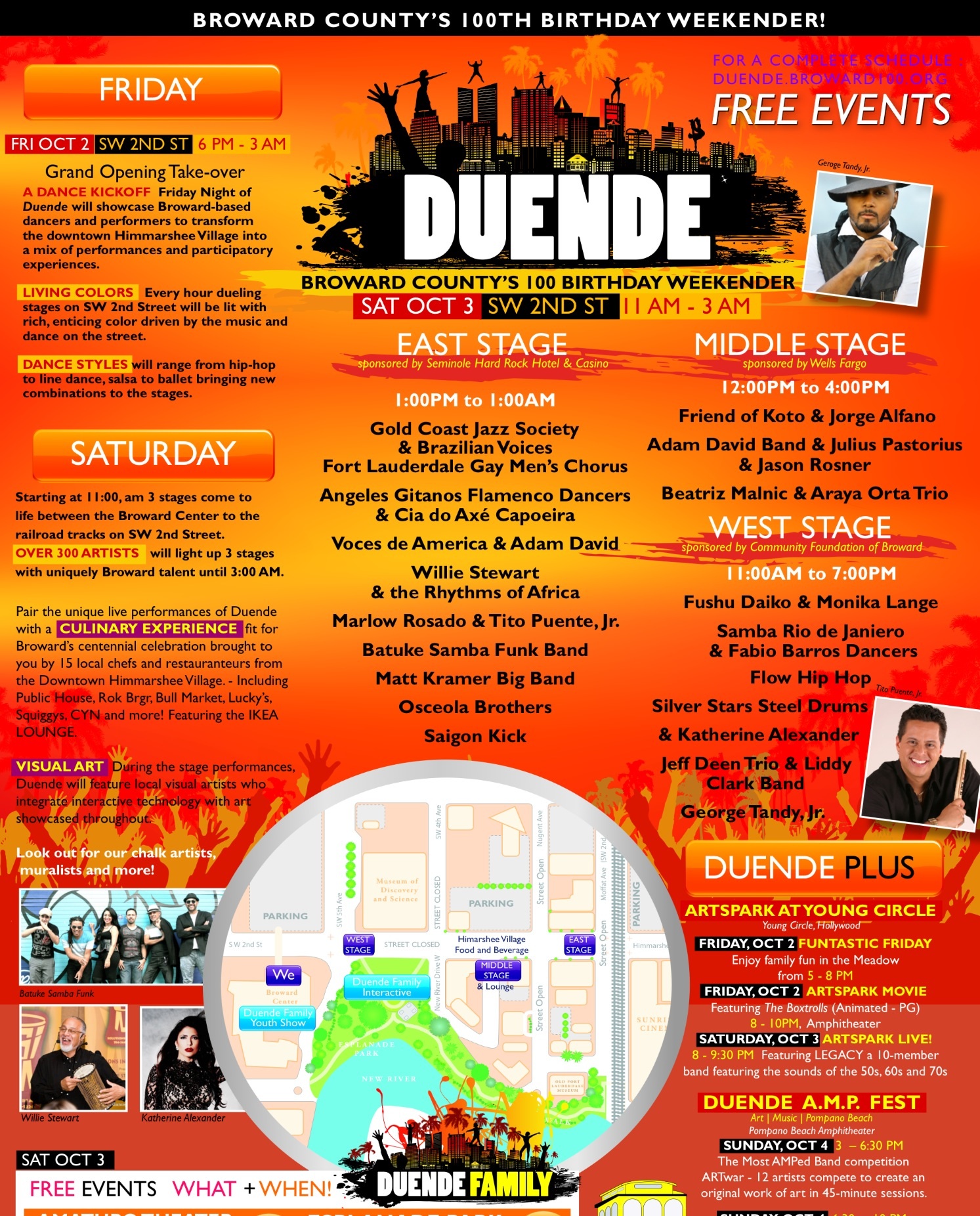 The coastal town of Wilhelmshaven, Germany hosted its 5th annual Street Fest August 1-2 in its City Center along the Nordsee Passage. Over 60,000 people came to watch 40 international street artists chalk directly onto the paved MarktstraBe. Artists were divided into 3 categories: 3D, copyists, and free artists, of which I was apart of.
Here is the final result & meaning behind my 8×10 ft piece titled “Die Blaue Blume” or “The Blue Flower” 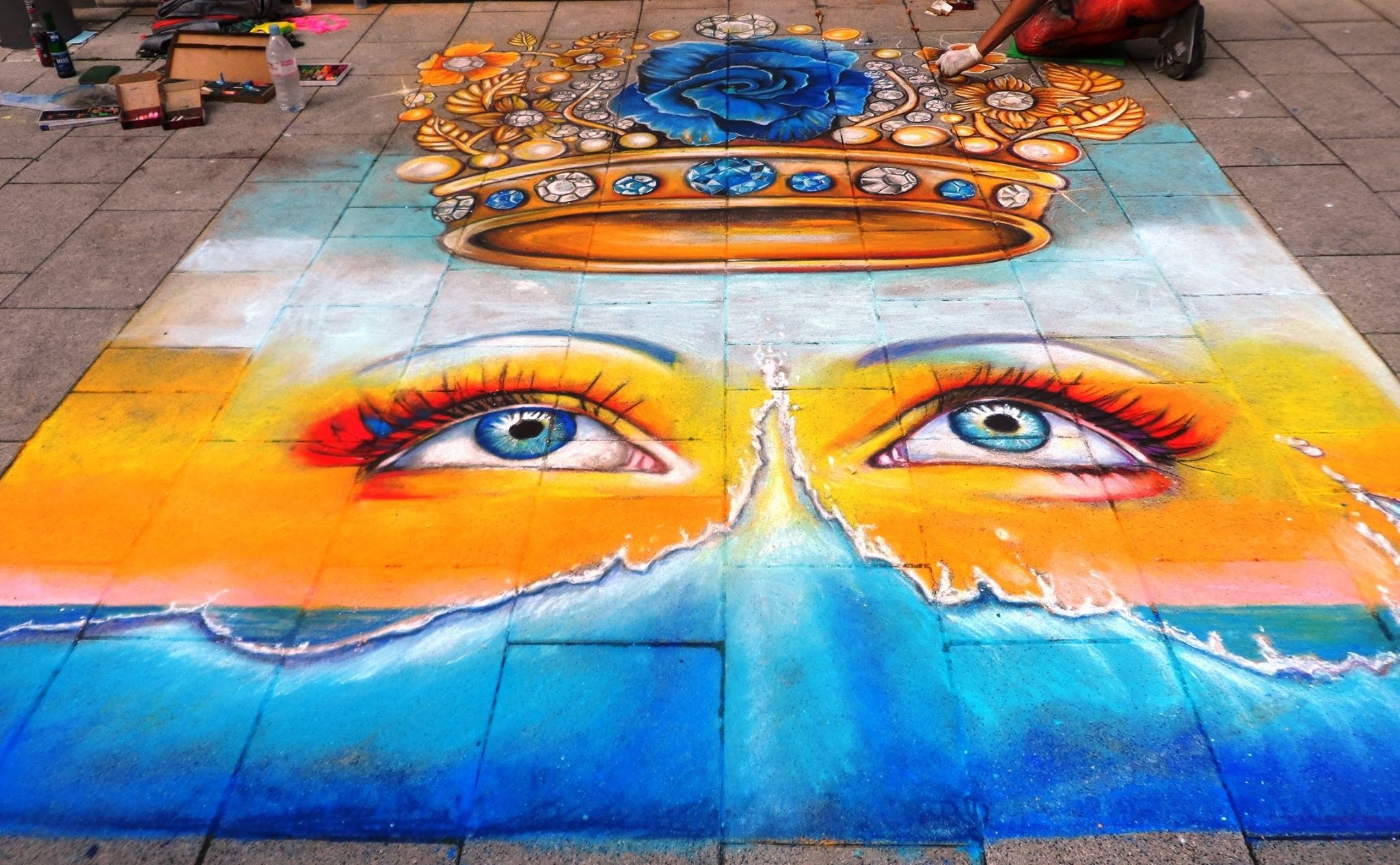 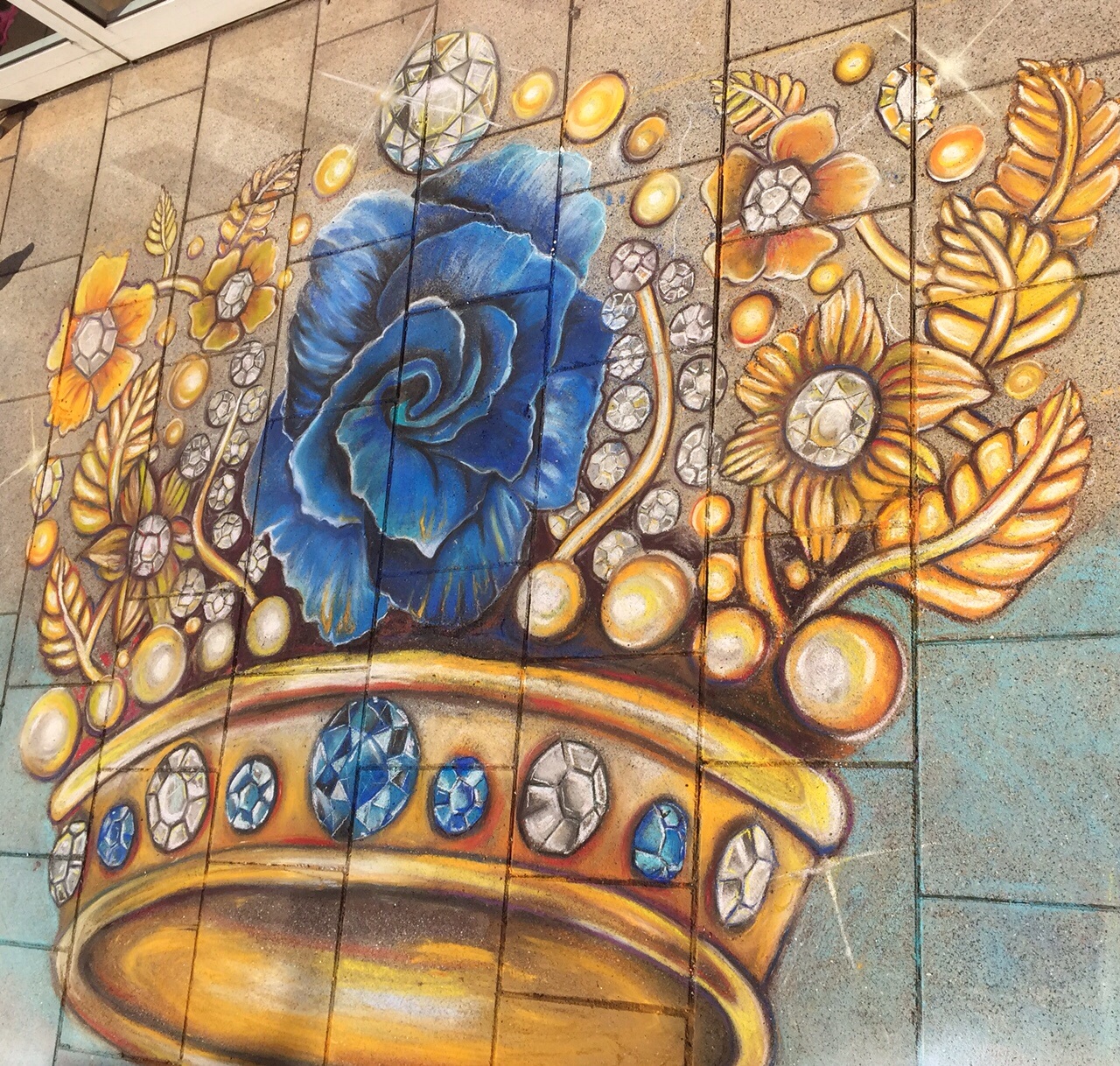 Close up of crown

“Infinite yearning”—this is how E.T.A. Hoffman summed up Romanticism. At the end of the eighteenth century, German poets, musicians, and philosophers spearheaded Romanticism. For the German Romantics one symbol summed up all their dreams—the blue flower. The image of the blue flower first appeared in Heinrich von Ofterdingen, a coming-of-age novel written by German romantic author Novalis in the eighteenth century. Rejecting the materialism of the bourgeois world around him, the young Heinrich searches for artistic and spiritual fulfillment, symbolized by a perfect blue flower. “It is not treasures that I care for” Heinrich said to himself, “but I long to see the blue flower. I cannot rid my thoughts of the idea, it haunts me.”

“After first gaining popularity during the Romantic movement, the symbol can also be found frequently in German folk songs of the last two centuries:
“If the golden sun laughs so bright, the world I must go roam,
Because somewhere in the earthly light, the blue flower must grow.
So I search the land and near the sea, to find this little flower,
And only where that blossom be, could I ever cease to wander.”
-“Wenn hell die golden Sonne lacht,” author unknown

The blue flower was adopted by both the German youth Movement during the Weimar Era and the Student Movement of the 1960s as a symbol of hope and regeneration after the world wars—the image could
be seen frequently on protests signs from both movements. Jim and Ruth Bauer, creators of The Blue Flower, were drawn to the image as it symbolized the complex world of the Weimar artists—searching both for artistic perfection as well as a way to rebuild the broken world that surrounded them.”
-American Repertory Theatre 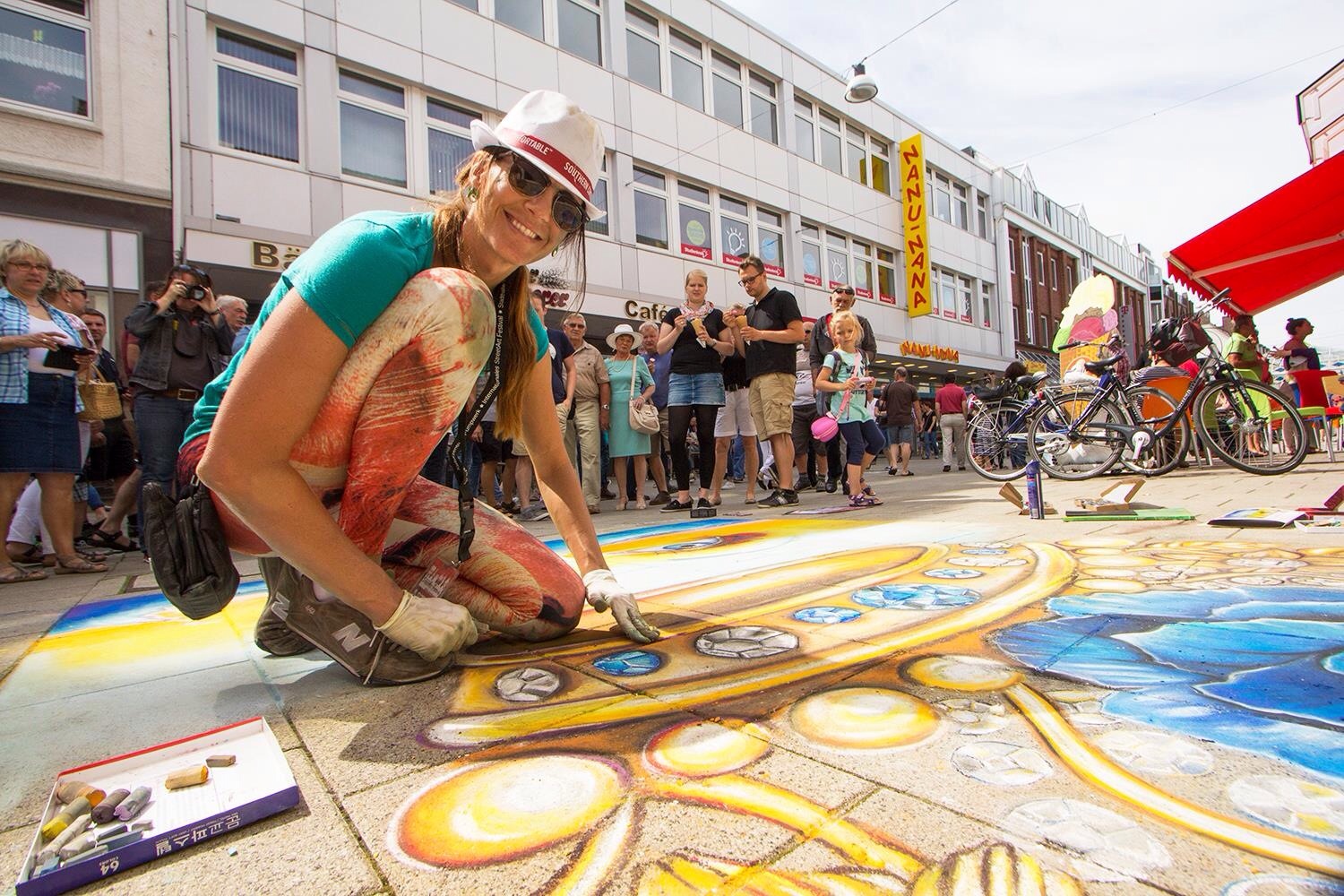 “A blue flower is a central symbol of inspiration. It stands for desire, love, and the metaphysical striving for the infinite and unreachable. It symbolizes hope and the beauty of things.” -Harvard University Press ISBN 0-674-02455-1 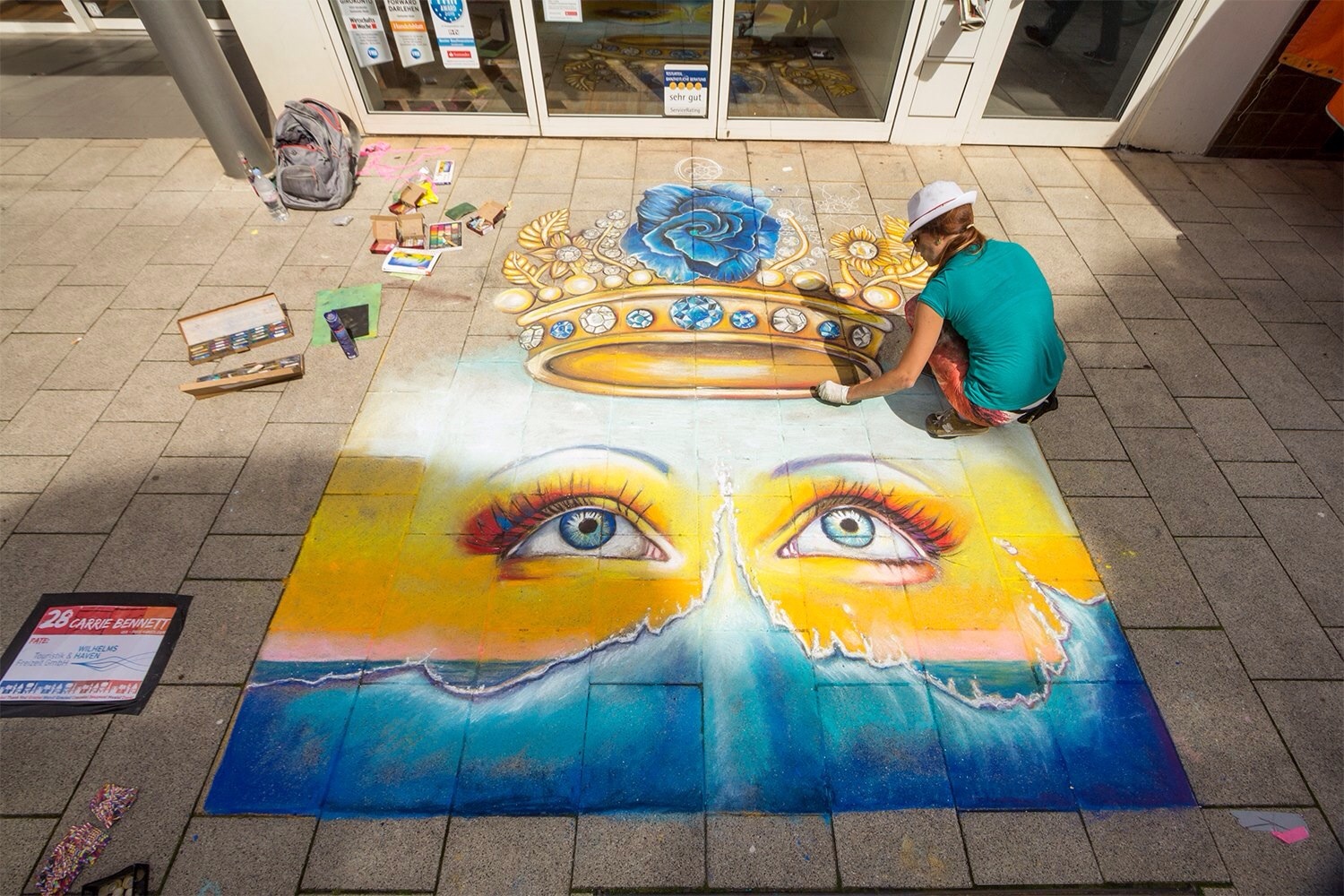 The 21st Lake Worth Street Painting Festival was a great success this year! Hundreds of artists created live chalk murals on the streets of Downtown Lake Worth, Florida Feb 21st-22nd sharing their passion & expression on the pavement. Here is my worked titled “Joy”, also featured in the Huffington Post article below: 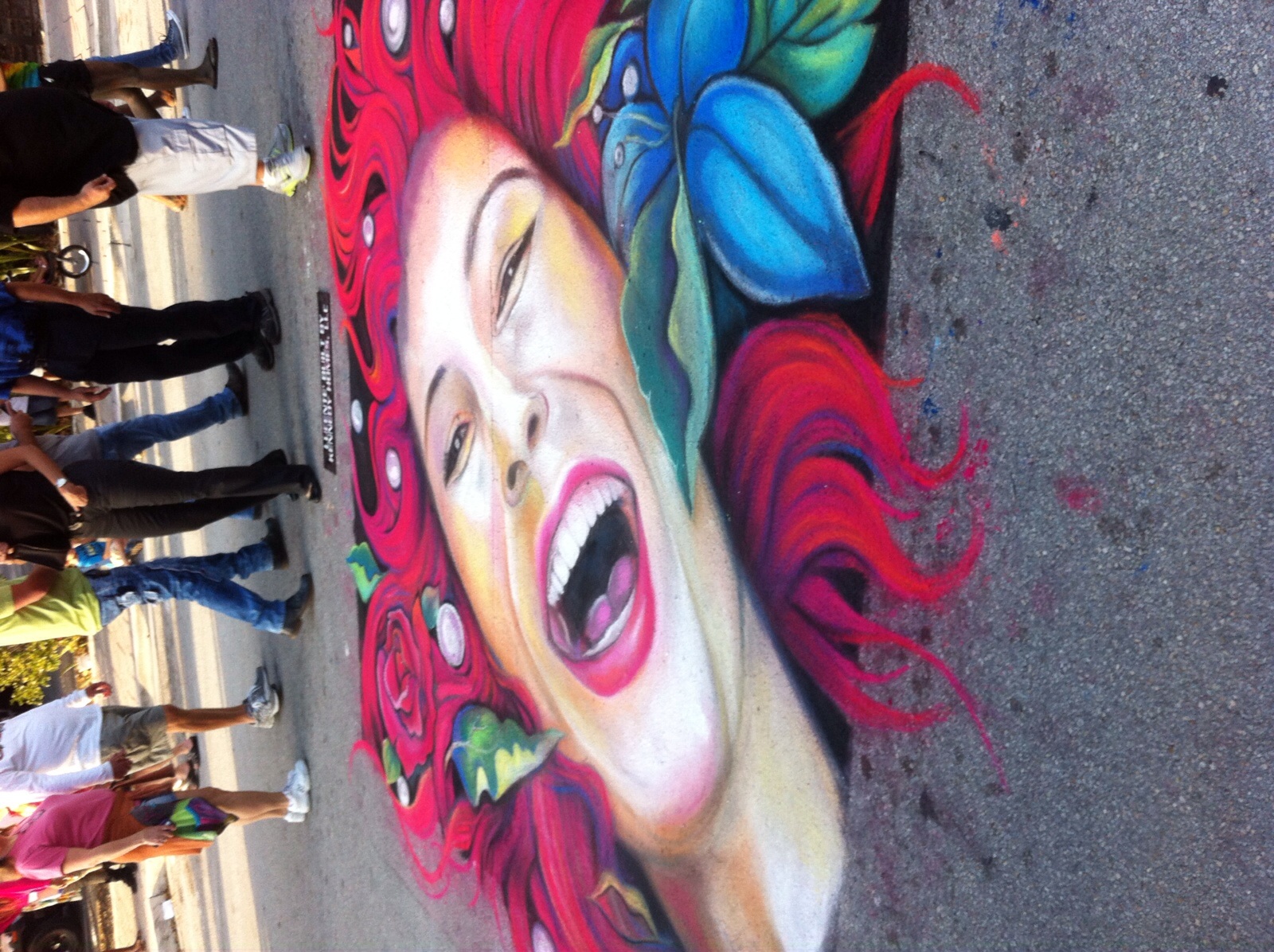 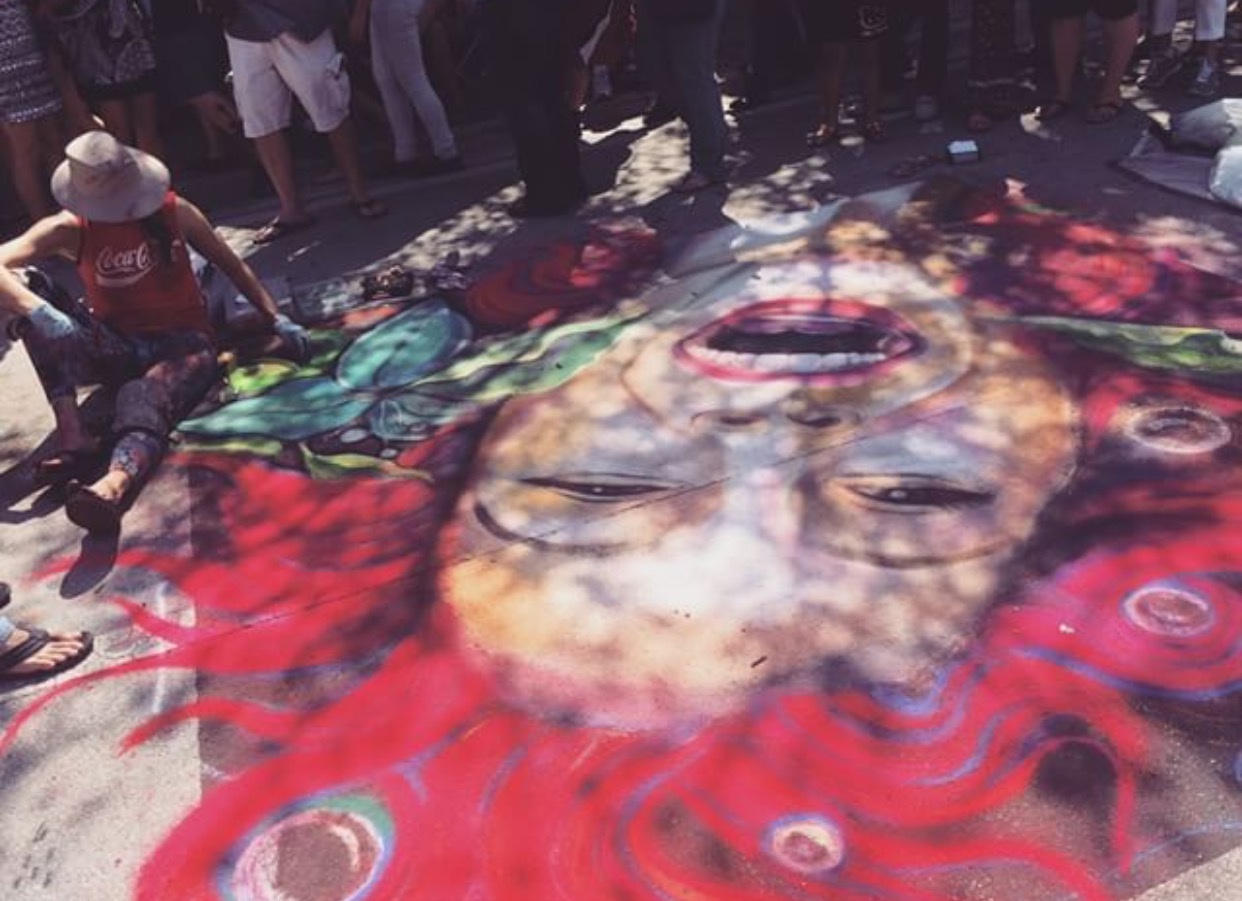 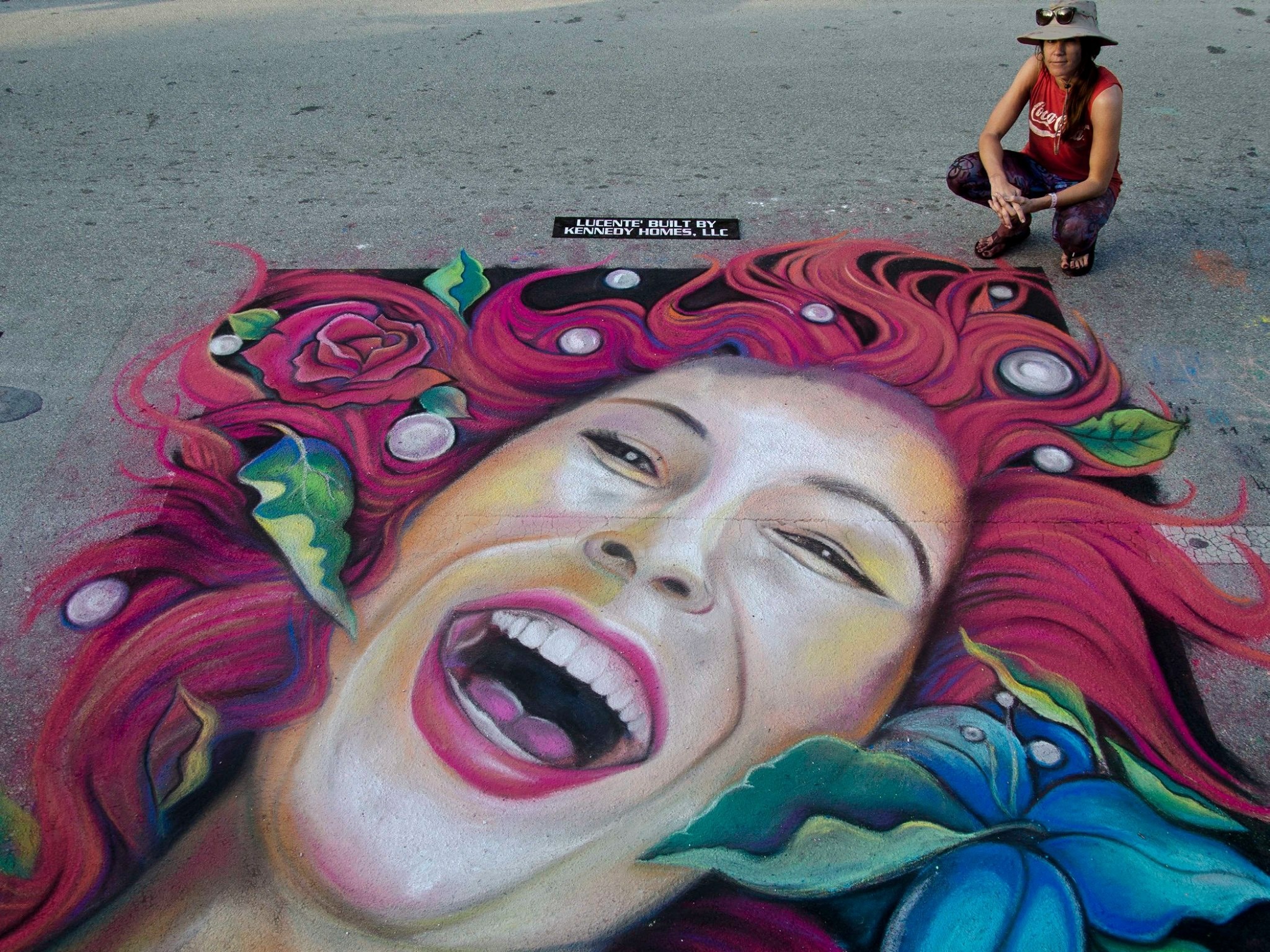 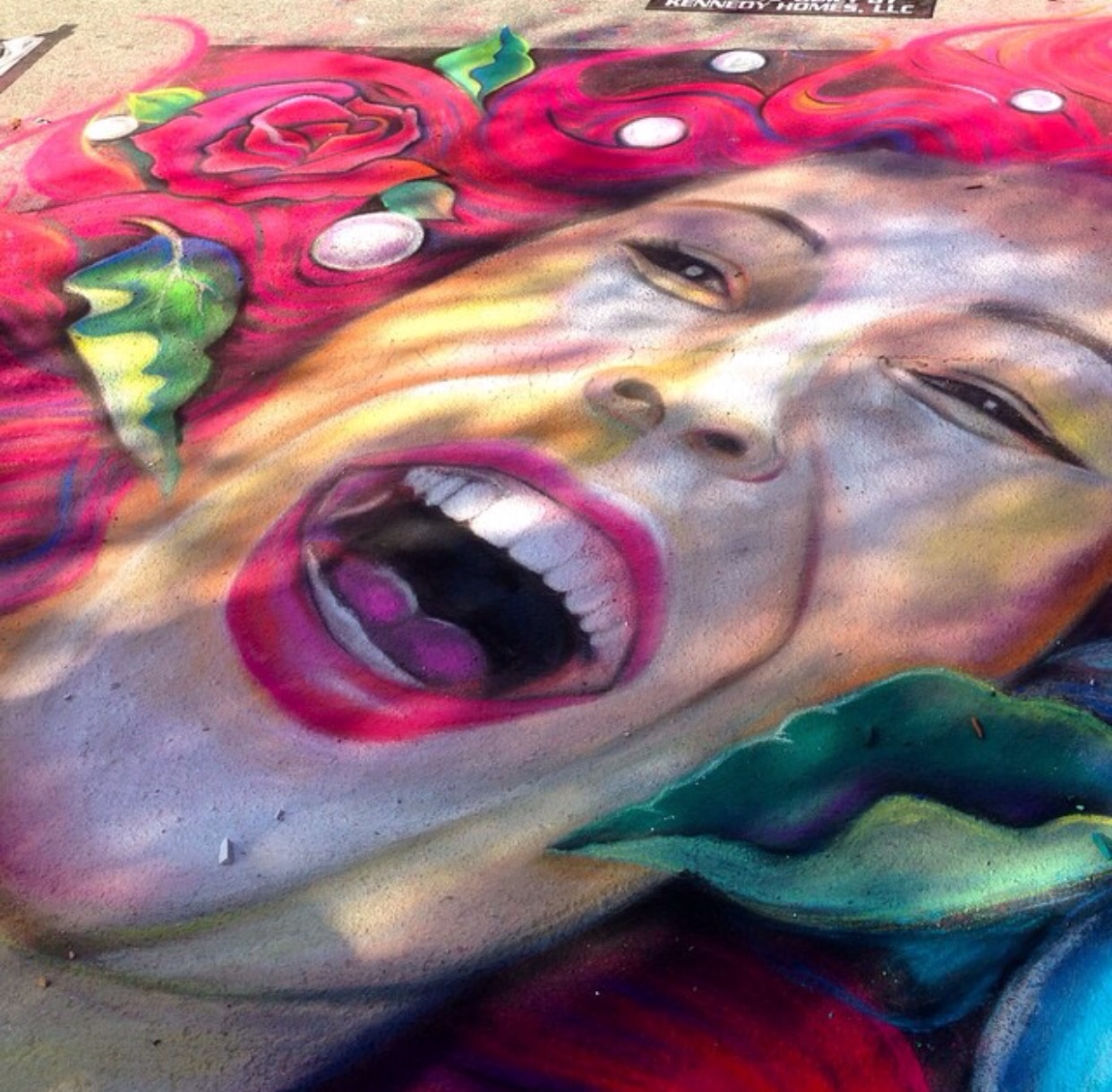 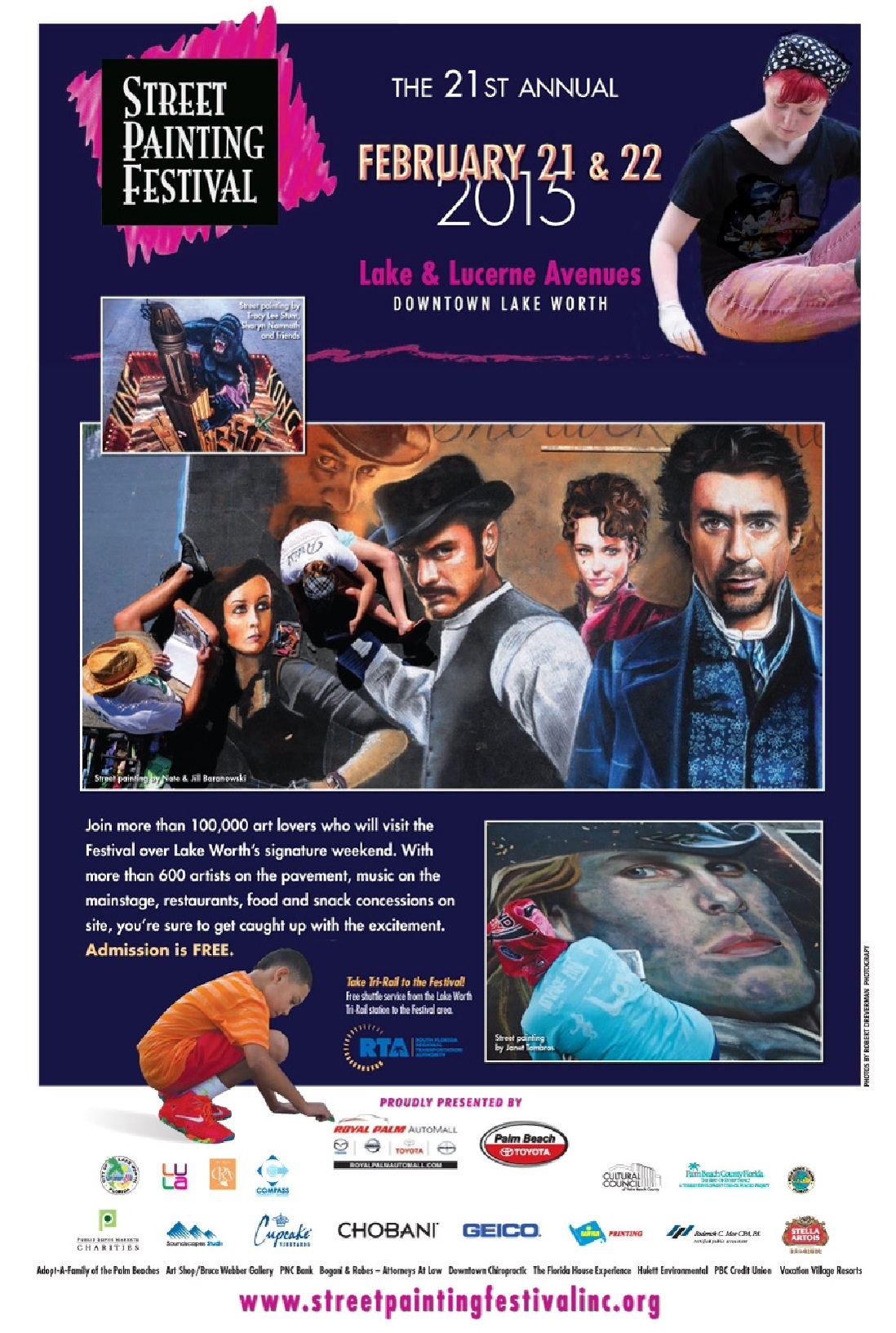 Mark your calendars this month for the 21st annual Lake Worth Street Painting Festival! Looking forward to working on my 10 x 10 ft work of art

Saturday’s Biz Art event in Coral Springs was a great success! I met so many kind people and enthusiastic kids of all ages! I created a brightly colored mockingbird for the literary theme of “To Kill a Mockingbird” selected by the Coral Springs Museum of Art. 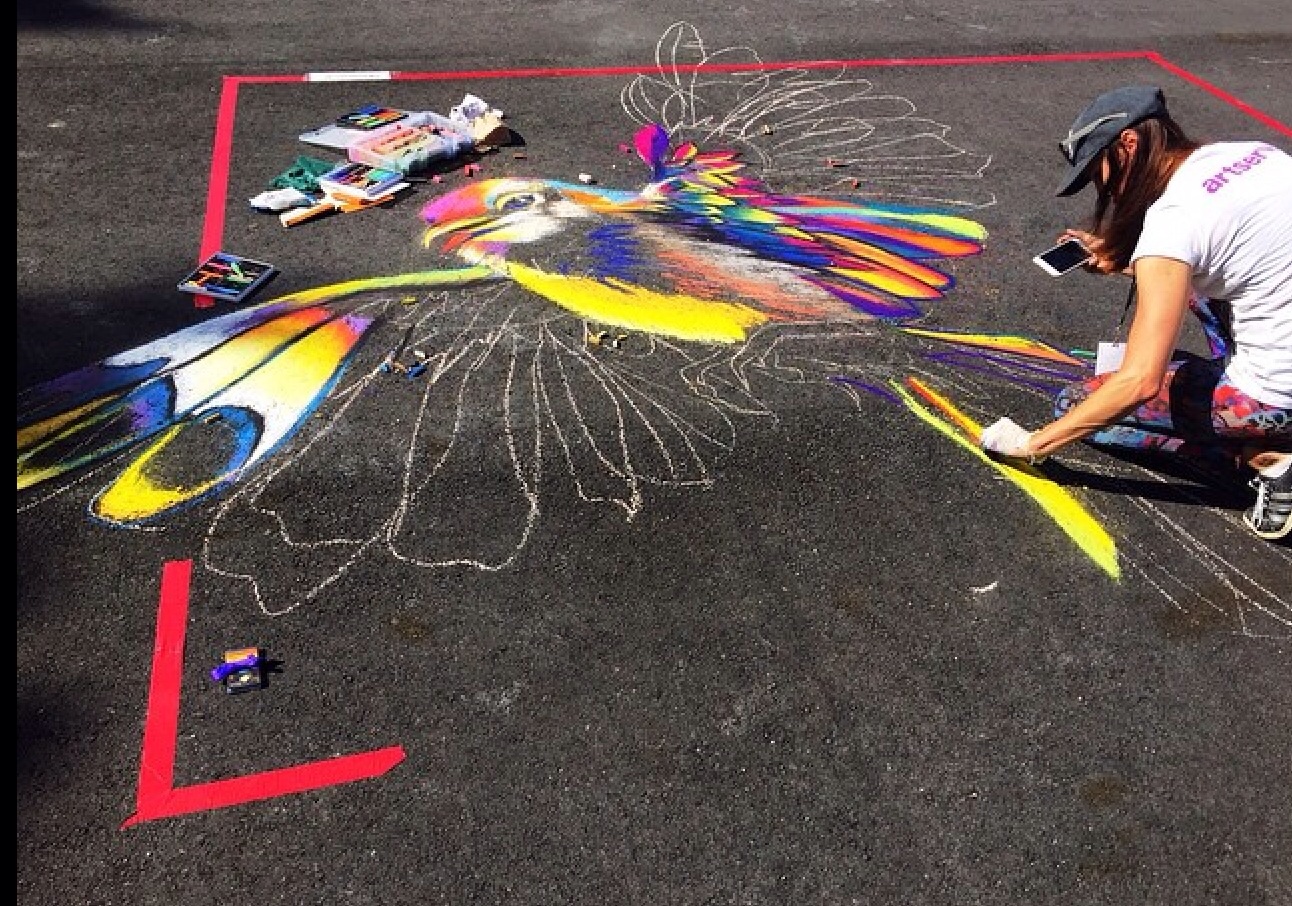 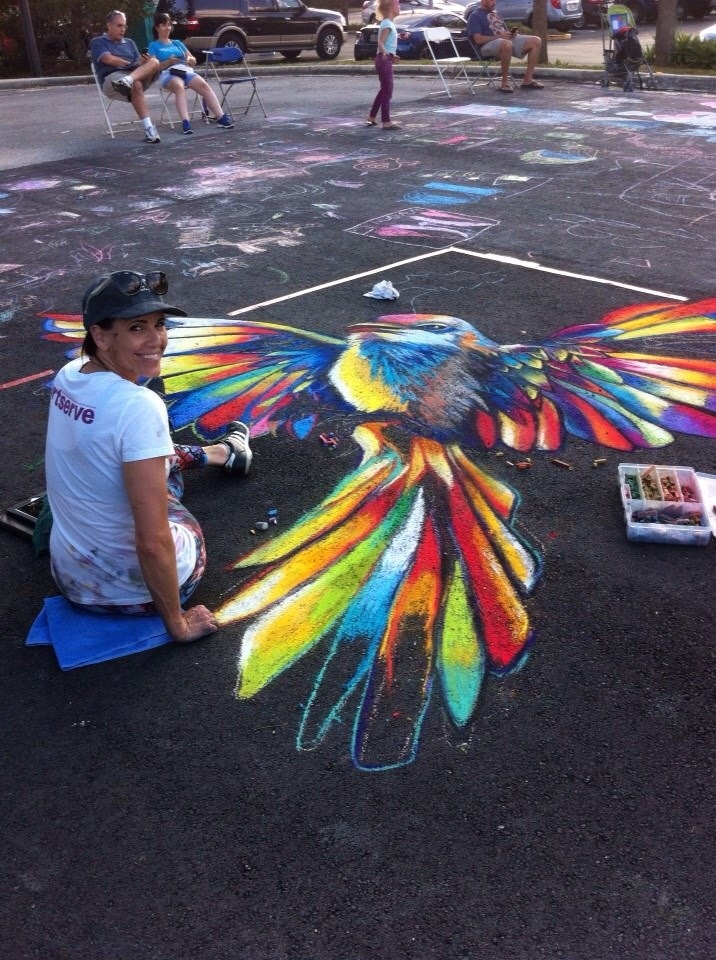 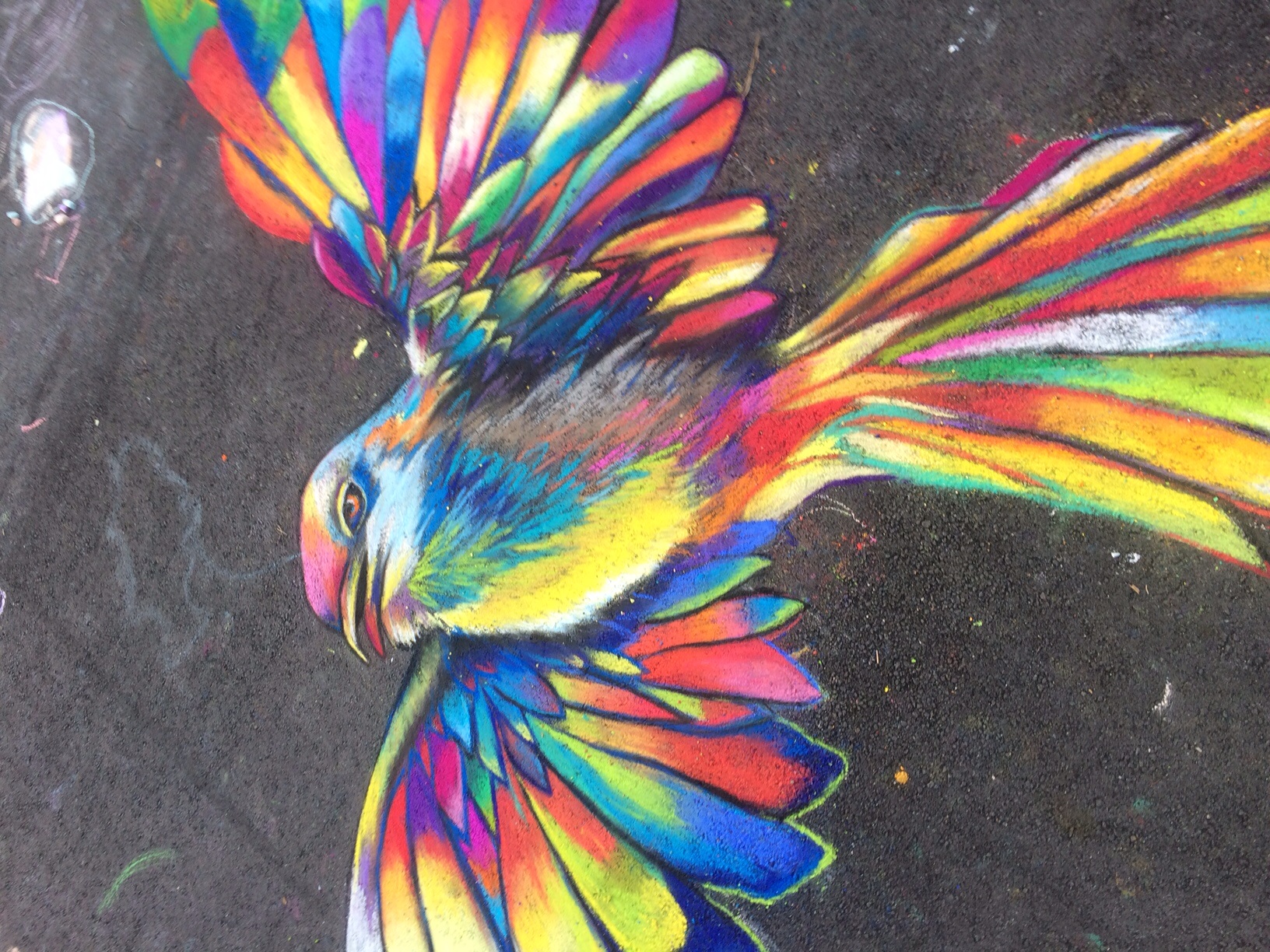 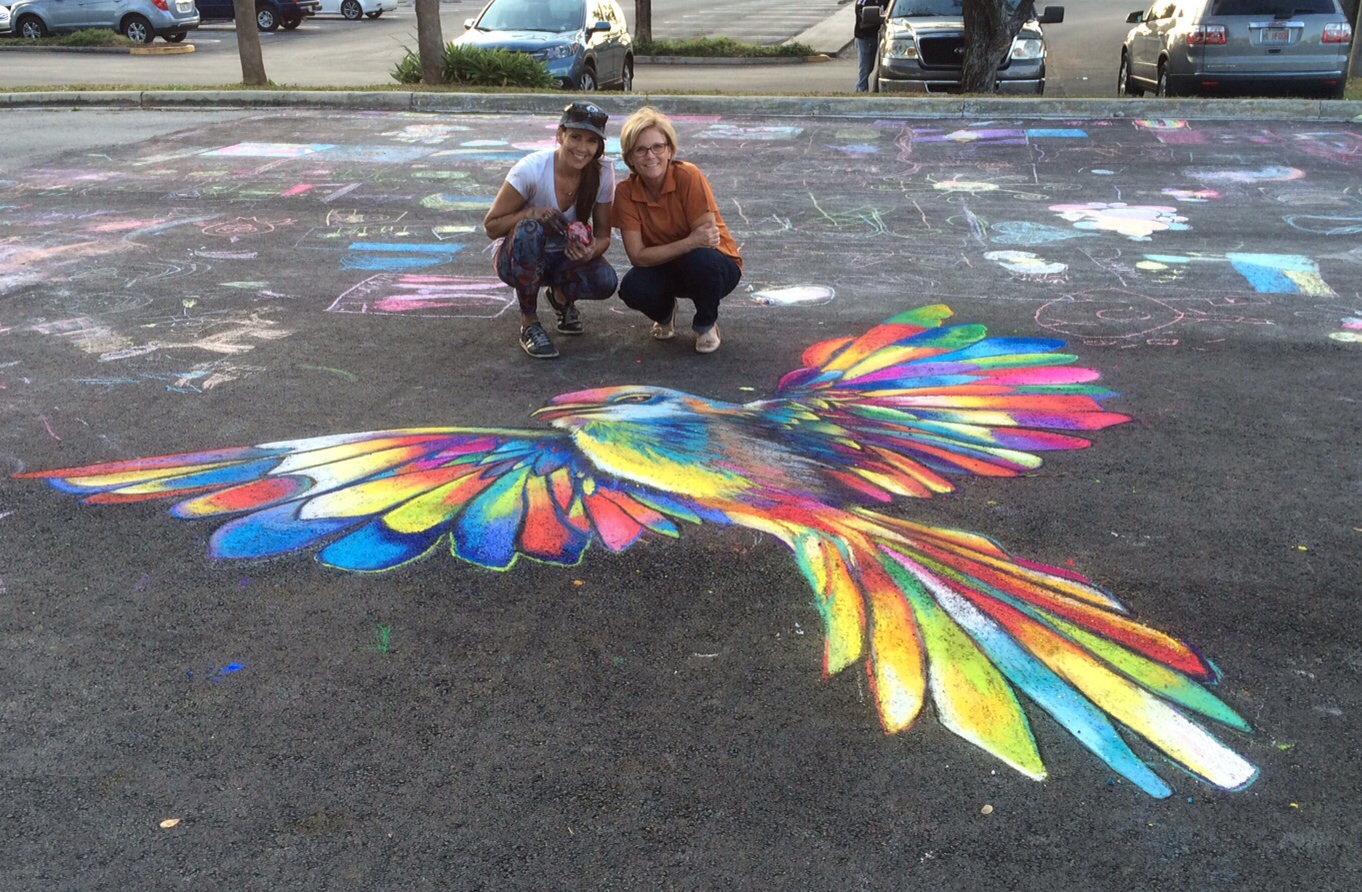 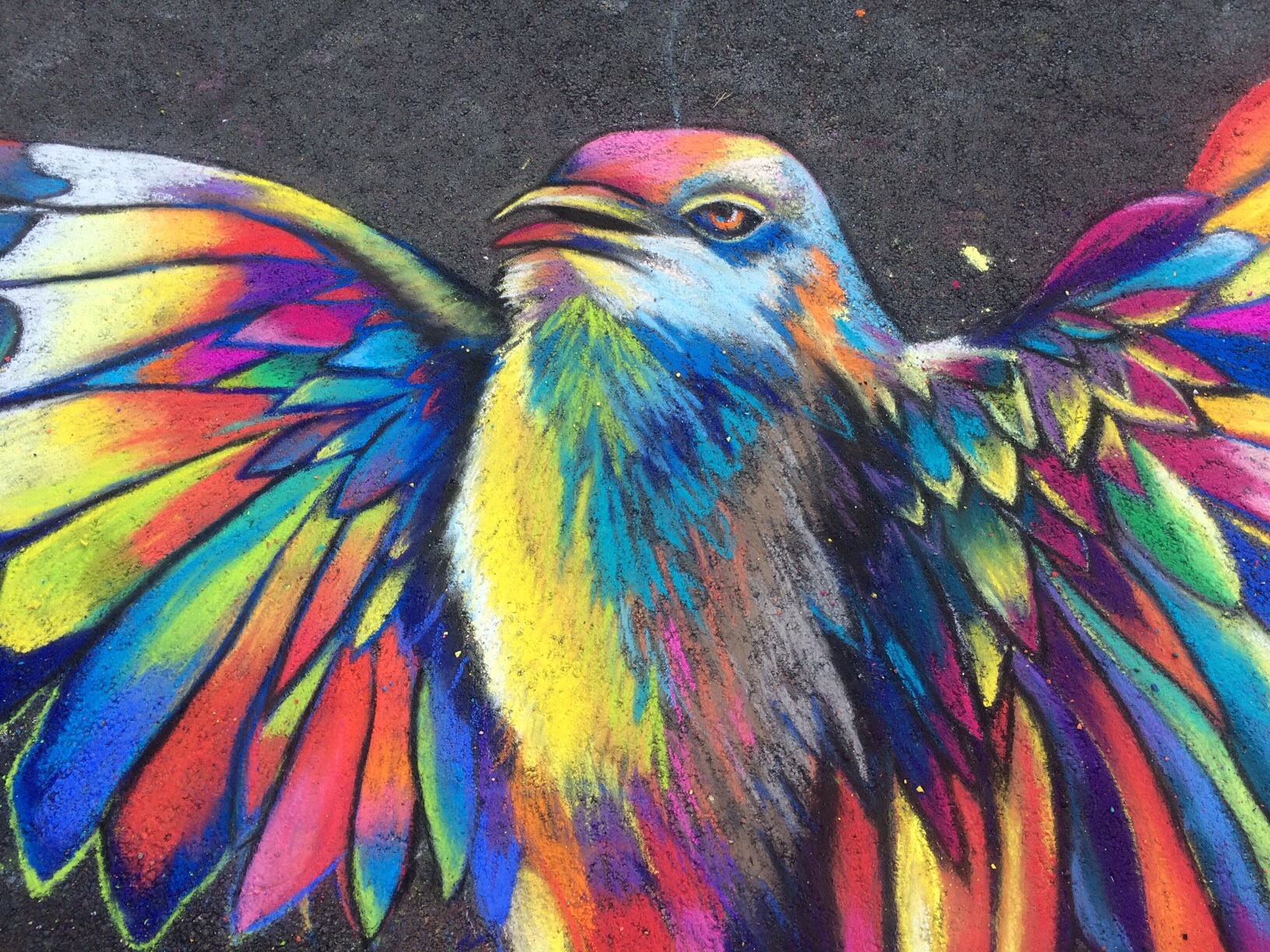 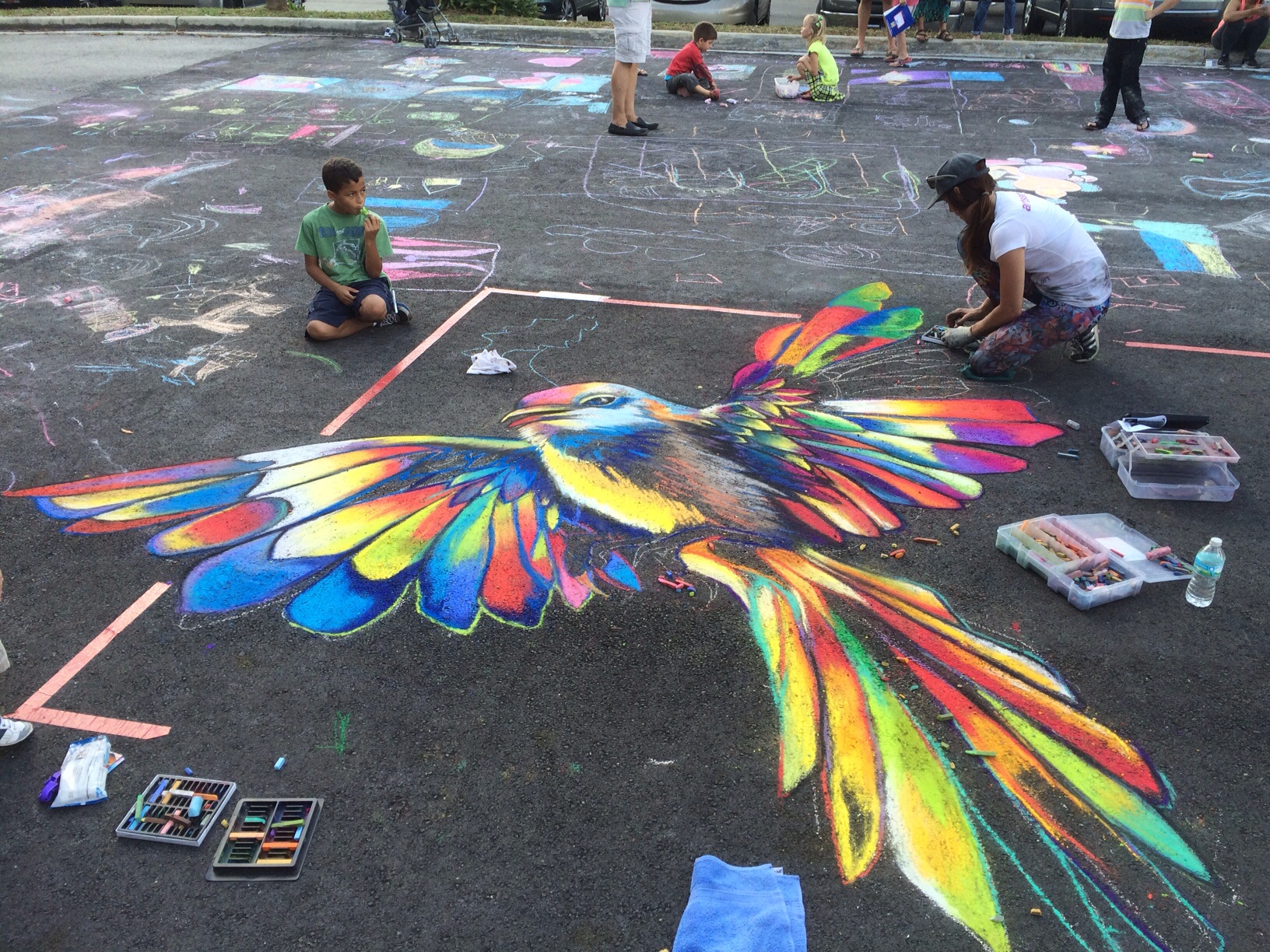 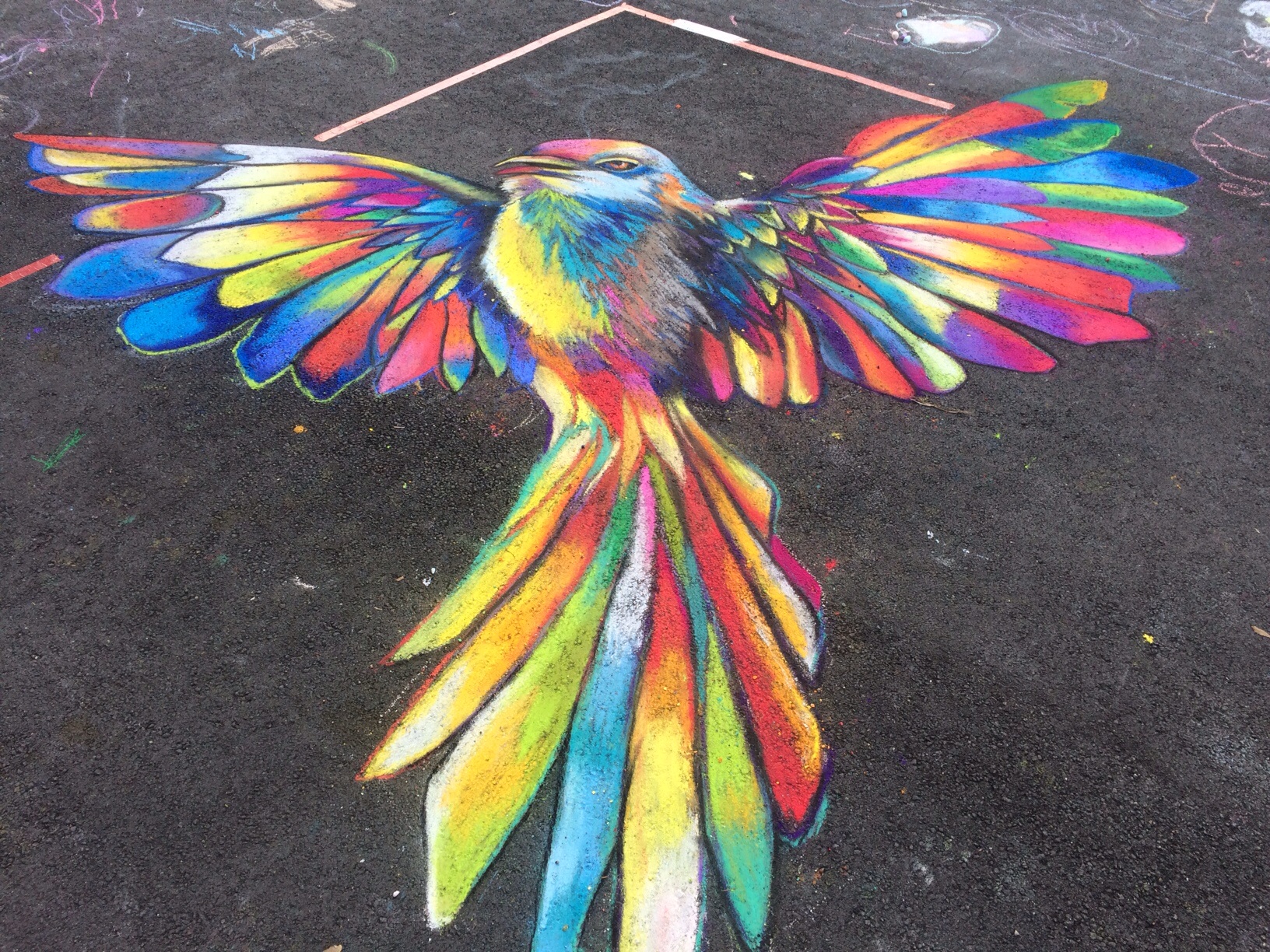 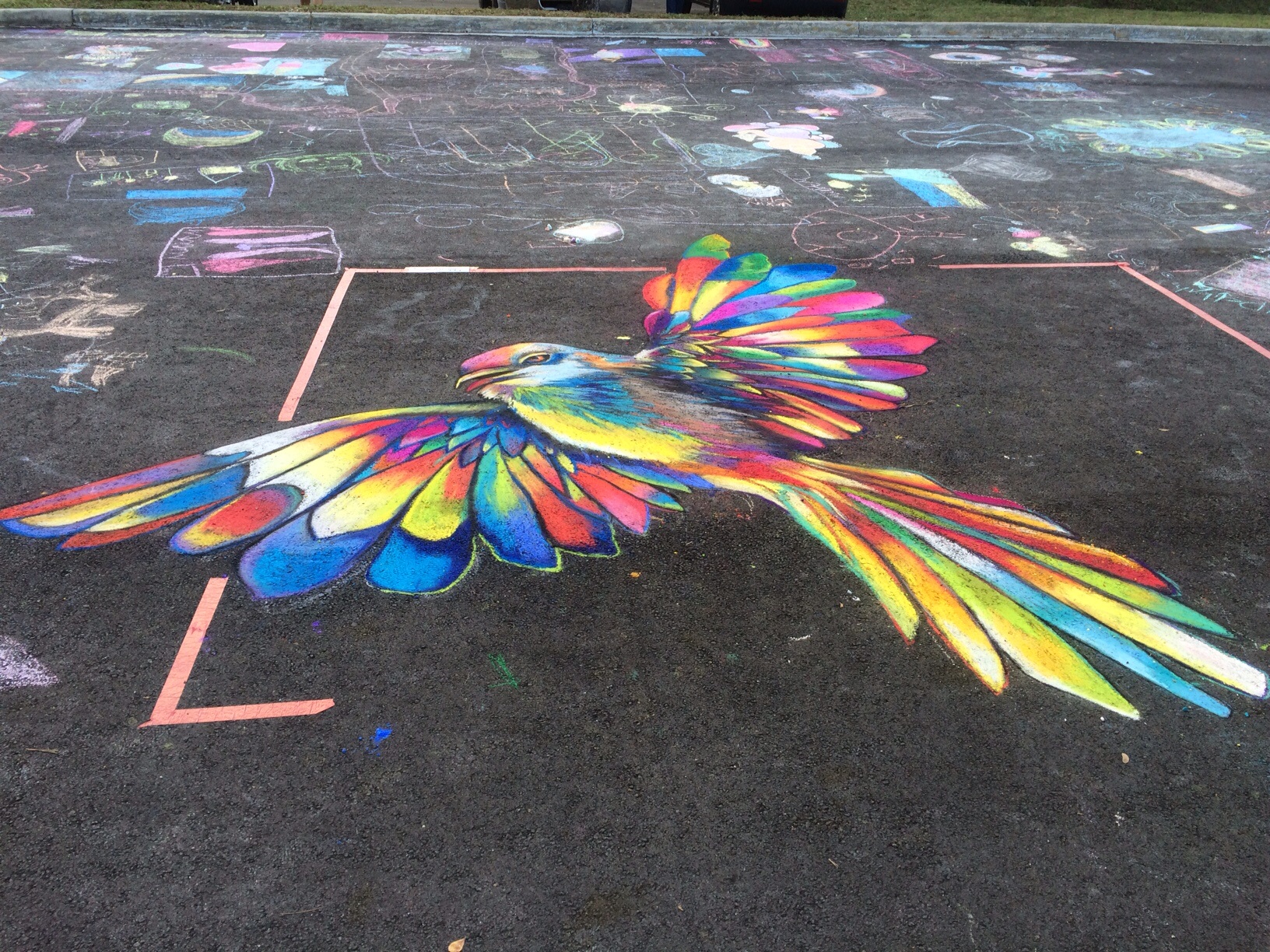